It’s been ten days since my implant exchange surgery. I admit that I originally planned to post about it much sooner, but emotions took me by surprise and I decided to wait a bit longer. Details about that to come later in this post.

My implant exchange surgery was at the UCLA Outpatient Surgery Center. I was told to arrive between 9:30 and 10 in the morning. I got there on time and completed the necessary paperwork after changing into the lovely surgery garb. Then I waited. And waited. And waited. By 11:45 am, Mom and I were rather annoyed. We were told that Dr. Festekjian was still in surgery from an earlier case.

It’s frustrating…but there’s nothing you can really do in that situation. If some sort of complication happened during my surgery, I’d want Dr. Festekjian to care about fixing it instead of trying to rush so he could get to his next case.

Finally Dr. Festekjian came by around 12:30 pm and drew all over me in marker. My chest looked like a game of Connect the Dots. Then the anesthesiologist stopped in to ask me a few questions and to start my IV. If you’ve been following my blog, you know about the IV drama. Well, the saga continued with this most recent surgery:

I mentioned to the anesthesiologist that I have very bad veins. After much prodding and examining, he informed me that “whoever said you had bad veins was wrong; you have NO veins.”

He first tried my left hand. The needle went in and he poked around for a while but couldn’t get into a good vein. Ouch. Then he got wise and gave me a numbing shot, got down on his knees and poked my left wrist. After a few minutes he struck gold. Rejoice! No more poking. After he finished, he remarked that I could now put it on my CV that I “bring doctors to their knees.”

My veins really piss me off. Let me just rant for a minute: WHY ARE THEY SO AWFUL?! The day before my surgery I drank more than 80 ounces of water just to plump them up. And it was all for naught, because I still had to get stabbed multiple times! BLEHHHHH.

After the IV fun, I was wheeled into the operating room. That’s always a strange experience, because the anesthesia sleepy medicine has just been administered so I start to feel a bit giddy but I’m still coherent. Also, the operating rooms are never what I expect them to look like. I guess I’ve seen too many dramatic operating room scenes on TV.

Well I guess I conked out, because a while later I woke up in a recovery room to the sight of my friend Dustin, a first year UCLA medical student. Dustin and I went to high school together. He stayed with me for about 45 minutes, which was nice because it forced me to stay awake and to come out of my loopy state.

I was discharged around 4 pm and at my parents’ place in Redondo Beach by 5:30 pm. Bryce had a nice cold Jamba Juice waiting for me, and my mom whipped up some tomato soup. Yum. (I could really go for that right now, actually…)

All in all, the surgery process and immediate recovery was very reasonable. I did not take any narcotic pain meds (Tylenol was fine), and I could move around the house with relative ease.

Wednesday morning was the “big reveal,” the first time I would see my implants after surgery. I woke up early, excited to see them. I stood in front of the bathroom mirror, eyes closed, while Mom helped me cut off the ace bandage bra. The bandages were removed…I opened my eyes…and…

bleh. Bleh bleh bleh. I was not happy. My new breasts looked completely uneven. The left side was small and tight, while the right side seemed large and droopy. The nipples were no where near even. North and South Pole!

I stared for a while and then started to get emotional. Mom snapped some pictures and fired off a distraught email to Dr. Festekjian. I texted Bryce a very cryptic “my boobs look bad I’m sad leave me alone” kind of text, posted a quick “OMG” message to the Facebook previvor group, then cried myself back to sleep.

A few hours later I woke up to a reply from Dr. Festekjian and a bunch of comforting messages on Facebook. Apparently I was the only person in the world who did not know that you cannot judge the implants’ appearance immediately following surgery. Things are swollen, bruised, tight, uneven. They need to settle, and that takes time–weeks to months, even.

In addition to his email reply, Dr. Festekjian called later that day. He explained in detail that my left side had more scar tissue from the infection, so he did much more work on that side. Over time that side will drop and adjust to match the right side.

Well…that makes sense. The more he explained, the more I understood. He said he was still very happy with the results and could see symmetry in the breast folds. I don’t particularly know what that means, but a happy Dr. Festekjian is never a bad thing.

The reason I didn’t post on my blog that day or even the day after is that I didn’t want to be too emotional and scary. Emotion is good–and it’s honest–but I didn’t want my uneducated, post-surgery freakout to worry someone else who might be having the surgery. I hope that makes sense.

Yesterday I had a post-op appointment with Dr. Festekjian. Already he can tell that the left side is settling more. He said I should give it about eight weeks to relax into place, and that my right side will not drop anymore. We discussed options for after that eight weeks is up, incase I’m still not happy with the results. Fat grafting could be done to fill out “bumpy” areas (such as underneath the breast) and nipple alignment could also be adjusted. Insurance will cover those procedures since they are still a part of breast reconstruction.

I’m very pleased to know that I have options in the near future if I’m still not happy. But for now I’ll try to give it a rest and let nature take its course. Dr. Festekjian advised me to “stop thinking about your breasts for a little while.” I’m not so sure I’ll ever be able to do that, but I’ll try.

For now I leave you with these two comparison shots of the tissue expanders and implants. The implant shots were taken this evening. 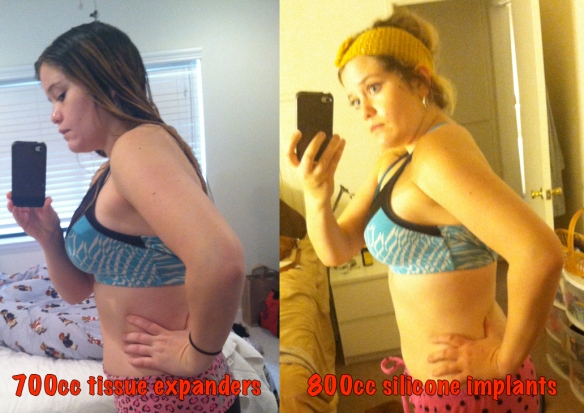 Happy Thanksgiving everyone. For me, this year is filled with many reasons to be thankful, and they are all people. So here it goes–in 2012, I’m thankful for:

Now, an update on my implants: Monday’s surgery was a success, and I am now the proud owner of two 800 cc style 45 high profile silicone implants. They are 14.2 cm in width with a 6.7 cm projection. Now, what does that really mean?

At the moment, I have no idea. My body is still adjusting from surgery, and to be honest with you, my breasts look very uneven. The right one is larger and falls lower, while the left one is small and tight and sits very high on my chest.

I had a freakout when I realized this yesterday, but Dr. Festekjian assured me via email and a phone call that he expected this to happen and that I need to give it time. He said that during his surgery, he did a lot of work on my left side to remove scar tissue from my earlier infection, and that the tissue was still swollen from that. He expects the implant to fall to the level of the right side over the course of a few weeks (to maybe a few months).

I’ll try to post pictures of my implants this weekend. Right now, I’ve got to get ready to see the new Lincoln movie with my favorite Abe Lincoln lookalike, Bryce. Happy Thanksgiving! 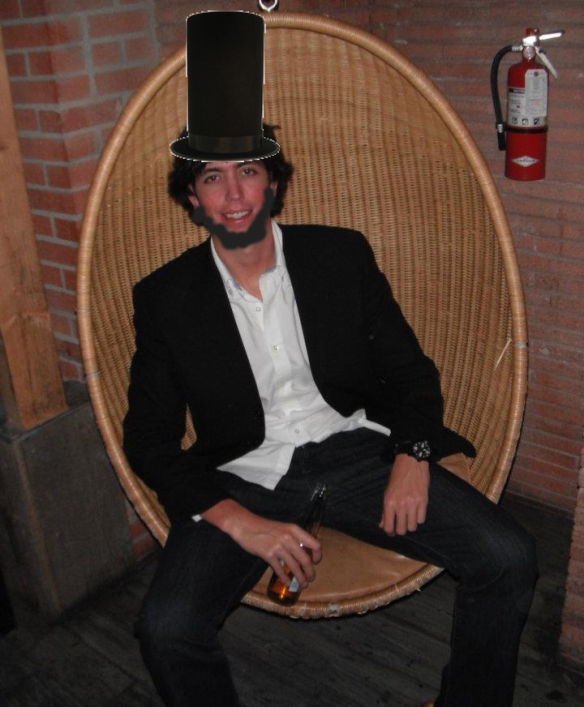 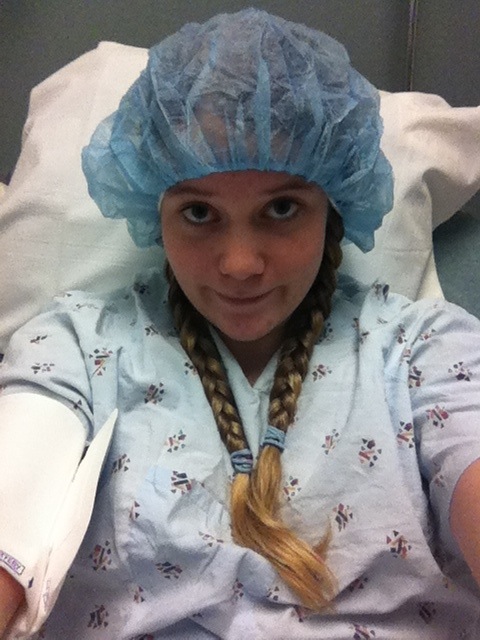 That’s right. You read that correctly: I GET MY SILICONE IMPLANTS ON MONDAY.

I’m going to be honest with you–that’s something I never in a million years would have expected to ever say, write or even think in my life. Me? Breast implants? Nah, never, not for me…but it’s happening! I’ll eat those thoughts with a fork and spoon (just not after midnight on Sunday).

After more than one year since finding out about my BRCA mutation and more than eight months since my original mastectomy, I am finally going to be done with surgery.  I almost don’t believe it’s real, but it is–two breasts, four Jackson-Pratt drains, three tissue expanders, one cellulitis infection, two falsies and many wireless bras later.

I had a pre-op appointment with Dr. Festekjian on November 8. He told me my implants will either be 700 ccs or 800 ccs, most likely Natrelle style 45 silicone. A few posts earlier I said that I probably wouldn’t get those implants because they’re very narrow, but Dr. Festekjian knows that I am most concerned about projection and they offer the highest projection. The total size of the implant (700 vs 800 ccs) depends on the width he needs to cover (13.5 cm or 14.2 cm).

At this point I’ve really stopped worrying about what size my implants will be. I trust Dr. Festekjian’s judgment completely. He did such a good job with my tissue expanders; people are always surprised to find out that my tissue expanders aren’t actually my permanent breast implants.

The night before my surgery I plan to take some photos of my chest with tissue expanders. I really want to create a visual of the different “stages” of breast reconstruction. The final stage photos won’t be ready for a few weeks since there will be swelling after the surgery.

Like Loading...
Hi, I'm Rachel, your average twentysomething. I'm in a sorority, I just graduated from college and started my first full-time job, and oh yeah, I recently had a double mastectomy! Welcome to my world of BRCA genes, plastic surgery, and snap-in-front bras.

Looking for gifts for mastectomy patients? Check out Precious Survivors for mastectomy pit pillows and other gifts. A portion of the proceeds benefits breast cancer previvor and survivor organizations.