Why? Why would I have a mastectomy, as a perfectly healthy 21-year-old?

I’ve been avoiding this post for a while–not because I didn’t want to answer the question, but because I didn’t know where it would belong. It seems like something I should have written about a long time ago, before my surgery. And I did write about it, for myself, to justify the decision. But now I want to “go public” with my thought process, because people are right: removing all of my breast tissue at a young age is absolutely ludicrous.

This time last year I was driving home from work, anxiously awaiting the debauchery that would be the following evening: my 21st birthday. At that moment, I was just a normal college student. I was so excited to finally be free of my crappy fake ID, but before that magical first legal drink, I would have to make sure my camera was charged, my hair was straight, and my clutch was packed with the necessary lip glosses and eyeliners. 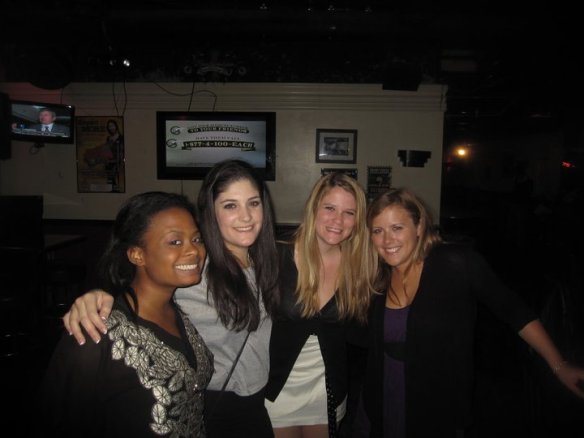 Six months later, everything was different. I felt nothing like that girl who was excited to go out to bars with her sorority sisters to celebrate another year. My BRCA test results were in, and it seemed that I would never be the same again.

I was suddenly resentful of my body. I felt so betrayed! My relationship with my body had never been perfect; there were certainly a wonky few years during high school. But since starting college, I’d finally become comfortable being me. And then, when things seemed to be going great in life, my body just threw me under the bus. “Oh hey! You’re gonna get cancer!” No, I guess it wasn’t my body–it was my DNA. That’s what made it even worse, at least at the time: the very essence of my being was flawed.

No one could see that I was broken, but I knew it. I just didn’t know when it (cancer) was going to strike. My breasts were–you guessed it–ticking time bombs (oh so that’s where the name comes from!) Every time I caught a glimpse of them in the mirror while changing, I shuddered. I hated them. I didn’t trust them. What if there was a cancerous cell lurking in them already?

The BRCA test results felt like a death sentence. But maybe that’s the wrong way to describe it…I never thought I was going to die…but I never thought I was going to live, either–at least not happily and cancer-free. It was a death sentence for my normal, relatively simple life. It was a sentence for cancer. I read up on the numbers, and I knew how BRCA had played out in my own life: my mom had been diagnosed with breast cancer twice. The fact that I, too, was BRCA positive meant that I was going to get cancer. There wasn’t hope that it would skip me or that I could diet and exercise my way out of it. No. If I lived long enough and had enough breast tissue, I was going to get breast cancer.

These two thoughts–resentment toward my body and belief that I would eventually have cancer–were what drove me to my decision to have a prophylactic mastectomy.

I really hate being depressed. I hate hating myself. I wanted, so badly, to get back on track with my self-esteem and self-image. You can only truly love someone if you love yourself first, and I really hated myself last October when I found out about my BRCA mutation. Imagine how poor Bryce [my boyfriend] felt?

A mastectomy and reconstruction would give back what the BRCA mutation had taken: my self-esteem. But it would also give me peace of mind. Many women who are at high-risk for breast cancer opt for the surveillance option instead of surgery. They are diligent about their mammograms, MRIs, and breast exams and join special hospital programs for high-risk women.

This was certainly a choice I could have made, but it was too passive. Yes, I could screen the heck out of my breasts, but that wouldn’t stop a tumor from forming. And let me tell you: I’m a worrier. If something hurts (my eyes, my ears, the space between my toes), I go to the webMD Symptom Checker and diagnose myself (and it’s always terminal). Imagine me at a yearly MRI or mammogram? I just know I would be freaked out for days waiting for the results.

And the way I saw it–again, based on the numbers–was that eventually one of those MRIs or mammograms would come back with a spot. I would get the spot biopsied, and then a doctor would tell me that I have cancer. The doctor, knowing that I have a BRCA mutation, would then strongly suggest a double mastectomy, followed by chemotherapy and maybe radiation.

I would not get to pick when this happened. Cancer would not care if I had a career and children to think of; it would just strike. I would have to halt my life for surgery and a very difficult treatment; I would have to explain to my family what was wrong with me. My mom didn’t get to pick when she was diagnosed with breast cancer. It just happened to her, and at a really sucky time.

When I found out that I had a BRCA mutation, I was given a choice–the choice my mother never had. I could choose when my life would be inconvenienced. I could decide if I wanted it to be because of cancer, or because of me. I decided to stop my life for a few weeks because of me–because of a decision I made myself. If I had decided against a prophylactic mastectomy, I would have to have one at some point, anyway…and it wouldn’t be prophylactic anymore. It would be because I had breast cancer.

My brother Michael put it best in an email to me a few days before my surgery: “Doing this [a mastectomy], or not doing this, are each big decisions.  One choice is potentially fatal, and one is just fucked up.  You chose fucked up, which is clearly the right choice.”

He’s right. It is “fucked up.” It’s ridiculous. It’s upsetting. I was distraught for weeks before my mastectomy, and sometimes now, even after, I get angry and sad and insecure. But it was the right choice. I didn’t cause the stop codon that screwed up my BRCA2 gene. Nothing I ate, drank, said, watched or smelled affected it in any way; it just happened. I couldn’t control it. But now I am in control of my body and health again, and I have my prophylactic mastectomy to thank for that.

I know blogs are supposed to be concise…and that certainly wasn’t. But I hope it made sense. I hope that at least one person out there understands my decision a bit more…I hope it doesn’t seem so crazy and extreme.

I want YOU to get tested for the BRCA mutation in 20 years so you can take control of your health again, future self!

Tomorrow’s my 22nd birthday, and I’ve given myself the gift of life! So cheesy, and so true.
Connect with Rachel on Google+

14 thoughts on “Why a Mastectomy?”