On Friday I graduated from USC. It seems like only yesterday my parents dumped me in my freshman dorm with a pile of stuff, and now eight semesters, 128 units, a few scholarships, and quite a few dollars later, I am officially a graduate! 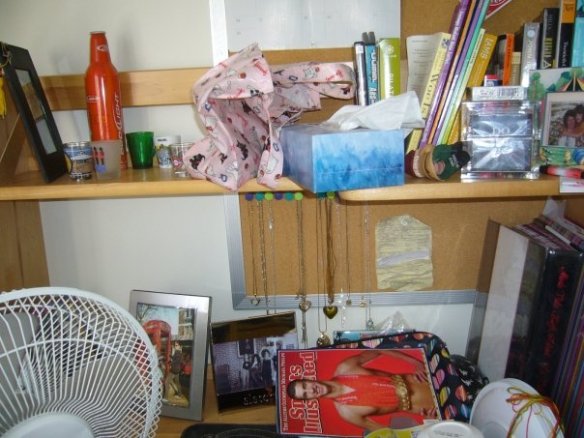 Here’s just part of that pile of stuff from my freshman year. I think I cut out that picture of Michael Phelps and put it on my binder.

Graduation, or the Dementor Convention as I like to call it, was a long affair. The first half was the main ceremony in which the graduates were recognized “en masse.” Christiane Amanpour was our commencement speaker. She did a good job, though the speech could have been a tad bit shorter. Honorary degrees were bestowed (if you donate enough money, you too can receive an honorary degree from USC!) and we heard from the valedictorian (“Well I didn’t vote for you!”). At the end all of the dementors (read: graduates) were shooed away to their satellite ceremonies. 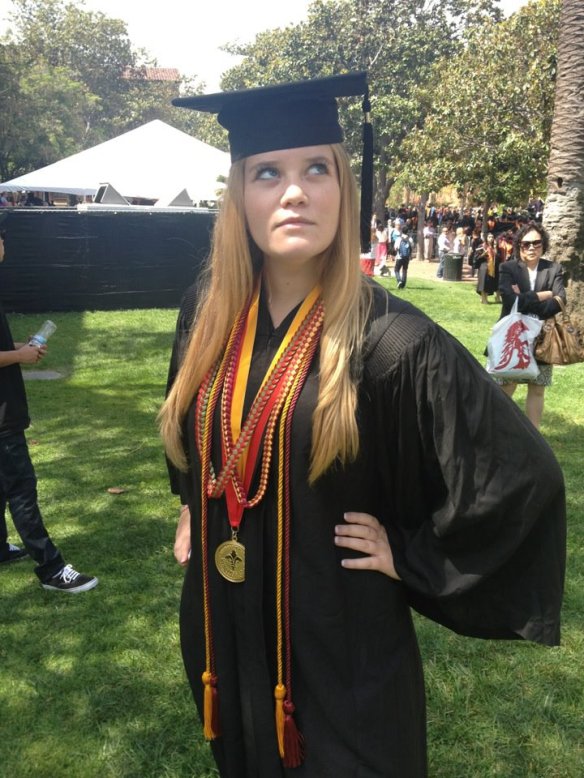 I dun gots me an edumucation!!!!

My satellite ceremony was held on the football practice field. Since the USC Dornsife College of Letters, Arts & Sciences is so big, we were split up into four random groups by major. My major, Narrative Studies, is really new and no one knows about it (I think there were like, five of us graduating with that major) so we were clumped in with the English department.

The satellite ceremony was short and sweet, even with the reading of each graduate’s name, so we were done by 12:45 pm…just in time for lunch! My parents and I piled into the car (which Mom had sneakily parked in a NON-EXISTENT SPOT, that trickster) and headed for Canter’s Deli…om nom nom!

At Canter’s we grubbed on everything in sight. I did stay true to my vegetarianism by avoiding the corned beef, but it was difficult. Corned beef from Canter’s is sooooo delish. During lunch we were interviewed for a Travel Channel show called Food Paradise. Apparently they are producing an episode about famous delis, and anyone who knows my father knows that he is a deli EXPERT. They got quite a few good sound bites from us.

My graduation dinner was on Saturday evening at Baleen, a restaurant in Redondo Beach. What a great event…my mom did a terrific job organizing it. There was so much food and everyone had a fun time. On Sunday we celebrated Mother’s Day with a family brunch and then some nice long naps. I gave my mom a Magic Bullet, the most sentimental and heartfelt gift EVER.

Today was my first day back at work. I work as an Associate Editor at Demand Media in Santa Monica, if anyone was wondering. I feel like I’ve had quite a few first-day-backs recently. I was actually excited to return since I’ve been pretty bored at home…but of course the Internet died around 2 pm and I had to go home early since I couldn’t get anything done without teh Interwebz! Hopefully it doesn’t crap out again tomorrow and I can actually get stuff done.

Now, I’ll address what you’re all dying to hear about: A BIKINI TOP. To be specific, MY NEW BIKINI TOP.

That’s right…I, Rachel Joy Horn, the boobless wonder, purchased a BIKINI TOP. That I will be WEARING. THIS SUMMER.

“…WHAT?!” I know, you’re shocked. Believe me, I was too. During the pity party I threw for myself after my tissue expander was removed I vowed that I would NOT appear in any sort of bathing costume this summer. It would just be too embarrassing and ugly, I thought. Instead I would wear a ridiculously oversized t-shirt like the fat kids wore during summer camp, because that would not draw any unwanted attention to me whatsoever.

Well, things changed when I started wearing my cotton prosthesis. I realized that I could trick the world into thinking I still had a left breast. So on Saturday morning I bravely ventured into Target’s swimsuit section, ready to break that vow.

I pulled out every bikini top that had adequate coverage (e.g. not triangles) and good straps. My mom, the expert seamstress, gave me guidelines for what kind of top would work best to support a prosthesis. I had brought one of the cotton forms with me and tried it on with each bikini top. At last I zeroed in on the perfect top: it had thick straps and a sturdy hook in the back, and it provided good coverage that could hide the prosthesis.

My job now is to actually find a waterproof prosthesis that my mom can sew into the bikini top. She said she could just use one of the cotton forms, but my concern is that I will become a human sponge. I’d rather find a gel insert that doesn’t absorb water. Does anyone have suggestions?

3 thoughts on “Graduation, my return to work, and a bikini top!”