Last month, I had the pleasure of visiting Trisha Frick at the Playboy Mansion. Trisha is one of Hugh Hefner’s girlfriends and has lived at the Playboy Mansion for almost a year. She gets to go to awesome parties and dress up all the time; she has access to a gorgeous swimming pool and what seems like an entire zoo at the Mansion; and she has developed quite the fan-following on Twitter and the Internet in general (I KNOW some of you have found my blog by typing “Trisha Frick” into Google!)

But beyond all that, Trisha is something more: she is a young, BRCA+ woman with a strong family history of breast cancer. While her daily life seems glamorous and fun, she struggles with the same troubling concerns that many other high-risk women face. Breast cancer has affected her life in ways to which many of us can relate. And like many of us high-risk women, she is taking the initiative to undergo a prophylactic mastectomy.

During my visit at the Playboy Mansion, Trisha was gracious enough to let me interview her for Ticking Time Bombs. I apologize for the lack of organization in the interview; I didn’t come prepared with questions, and so we ended up having more of a conversation than a real interview! It’s over 2,000 words, so I’ve divided it into two parts.

This interview isn’t meant to be about Trisha as she relates to Playboy; it’s meant to be another BRCA+ woman’s story. It’s another opinion, another perspective, another experience. We can all learn about our own health struggles by hearing from other people. So, without further ado, I give you part one of my interview with Ms. Trisha Frick! 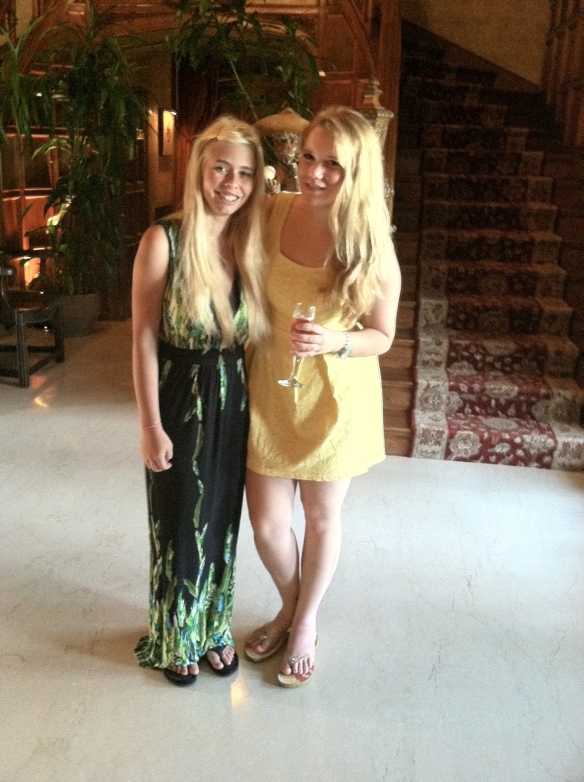 Trisha and me before dinner at the Playboy Mansion the evening of the interview.

Rachel: So even though she had breast cancer, she still didn’t want to get tested?
Trisha: She didn’t want to get tested…and I find that out a lot, through talking to other people. Even though they have breast cancer, they don’t want to find out for their family. And it’s really weird to me; you’d think you’d want to find out for your family. That way they can get help and prevent themselves from being in the same position.

Rachel: That’s interesting. I know when I find out I was positive for the gene mutation, my mom texted me saying how sorry she was…and I was like, “chill…you didn’t have the choice.”
Trisha: My mom was the same way. She feels very guilty for me having it, even though it came through my father’s side. A lot of people don’t understand that it can come from either the mother’s side or the father’s side.  And so even she feels guilty for me having it, and I’m like, it’s not your fault, forgive yourself. And I think a lot of people don’t want to get tested because they don’t want to feel like they gave it to someone else.

Rachel: I know you had said to me before that you don’t want to pass this gene on, so are you really against having children?
Trisha: Until they figure out whether they can isolate the gene, I’d rather adopt a kid than have my own child. I’m not against children at all, I just don’t want to pass this gene on to a kid because I know all the worry that I’ve had to go through and my family’s had to go through. If I stop it, it stops in my family.

Rachel: How old were you when you found out about the gene?
Trisha: I found out I had the gene when I was 21. I wasn’t surprised because I knew my family history, so I figured that I had to have it. I found out I had it and it wasn’t a big deal to me. I lived in San Antonio, Texas where medical places and people weren’t as big on BRCA genes as they are out here in California. And so I was like, the first patient, the only one…the guinea pig for all of these places. So coming out to California to UCLA Medical it was like, finally, they know stuff! I’m not the only one! It was a big relief.

Rachel: Did you start doing surveillance?
Trisha: Yes. I did surveillance back in San Antonio where I had the yearly mammograms. I’ve had mammograms since I was 21, but I’m so young and I have dense boobs so mammograms don’t show so much. When I finally went to UCLA, they said that I should do an MRI instead. They only do MRIs on me once a year and forget the mammograms since my boobs are so dense they can’t see anything anyway. But going through the process of an MRI is scary, and it’s not a cheap thing. That’s my main decision to get a prophylactic mastectomy. Why go through all this surveillance and spend all this money when you can have new, perky boobs at the price of an MRI? And then the worry is gone.

Rachel: That’s how I saw it too. I either do surveillance and then I do the surgery anyway [because of cancer] and then I have to do even more and pay for even more, or I do the surgery now and not worry about any of that stuff.
Trisha: Exactly it’s like, why wait to get cancer? When you do it prophylactically, it’s on your time frame at your pace…everything is convenient for you. Versus when you get cancer, it’s like, “Oh we gotta do this and this and this now no matter what’s happening in your life.” I saw that with my aunt, and it’s overwhelming, even more than it would be if you do it prophylactically.

Rachel: When did you start seriously considering doing the prophylactic mastectomy?
Trisha: When I was at a place in life where I was comfortable with it. I didn’t want to do it before I was comfortable and before I had the right time schedule. I didn’t have cancer yet so I could postpone it but I knew I’d probably get it at sometime in my life so I might as well get it done sooner than later. It was on my time frame, not cancer’s time frame.

Rachel: How do you feel about your body image, knowing you have the gene mutation? It really messed up my body image for a while, that’s why I ask.
Trisha: I’m happy to have the surgery, per se, because then I get perky boobs again! I have double Ds now and they started to sag a long time ago, so I want them back up to where they’re supposed to be, as high as they’re supposed to be! As the years go on, they sag and sag…so in the way, it’s a good thing!

Rachel: Right. It’s like you get insurance to pay for a boob job! That’s what I tell people sometimes.
Trisha: I’ve met some women who are scared about losing sensation in their breasts…and it surprises me, because really, that’s the biggest worry, losing sensation? Are you kidding me, you might get cancer! Who cares if you lose sensation in your boobs? Mine grew too big too quickly so I don’t have that anyways. It’s not a big aspect of worry for me.

Rachel: And the way I see it given the statistics is that either way, you’re probably going to have the surgery. So you either put it off and wait to have the surgery, or you do it now.
Trisha: Exactly, and if you wait, then you’ll have to go through chemo and radiation and you’ll lose your hair. When I had my MRI done, I had an abnormal lump that turned out to be a lymph node. But during that time between finding out it was a lymph node and not a lump—the anxiety was horrible. That was the big push for me to get proactive: “oh shoot, I may have a lump.” And even though it was just a lymph node, I realized that I don’t want to feel that ever again in my life.

Rachel: I can’t even imagine how that felt because I’ve never had that feeling, but I’m so scared of it.
Trisha: Right. And once you have the prophylactic mastectomy, your risk goes down so much, back to the normal population’s. You don’t have to worry about that feeling.

Rachel: It’s not at zero, but it’s so much lower than it was before, and it’s lower than the average woman’s risk, too. Have you thought about what kind of mastectomy you want to do, nipple-sparing, skin-sparing…?
Trisha: I want to try nipple-sparing if I can. When you get cancer, you might not have the option to do it. You do what they tell you, versus, doing it prophylactically and having the choice. (Note: Trisha emailed me a few weeks after our conversation to say that she is now thinking of a skin-sparing mastectomy instead: “I have now seen a plastic surgeon who says with my family history and the size of my boobs it would be hard to save the nipple. It would be more aesthetically pleasing if he took them off. He does a really good job of rebuilding them at the end, it’s a third surgery but so worth it because when they save the nipple there is still a small risk of cancer because they have to save some of the breast tissue there.”)

Rachel: It’s interesting to hear different women talk about it. People will get emotional and defensive about their choice. But I understand the different arguments. Some women really care about getting their risk reduced as much as possible, while other women (like me) still want a little bit of themselves left. Dr. Karam [my breast surgeon] gave me the option of doing the mastectomy cut at the inframammary fold or across the nipple. And yes, I really wanted to do it at the inframammary fold because it’s prettier, but he basically told me that because I was about a D-cup, I had a lot of breast tissue so there was a risk that during the mastectomy he wouldn’t be able to remove all of the tissue. I decided to do the nipple-sparing because of the aesthetics, but I needed to suck it up and give Dr. Karam as much room to work as possible, so why wouldn’t I do the across-the-nipple scar? Yes, I’d have a scar, but I can deal with a scar. Scars fade.
Trisha: Exactly. People ask me, “Aren’t you worried about your future boyfriend not liking it?” If he doesn’t understand, I don’t want to be with him! If he can’t understand that part of my life—and that’s a huge part of my life—he wouldn’t be worth it to me.

Rachel: My boyfriend has been great. I can’t imagine how he feels about all of this. He has been amazing, and I think part of it also is that he’s had cancer in his family. He knows he’s at risk. And there are so many people like that who have a family history so they’re more aware. I really don’t think someone in the future who you start dating will be like “ohmygod you have a scar there!”
Trisha: And especially nowadays, breast implants in general are so common. And they’re typically done the same way. You have a scar no matter what you have: prophylactic mastectomy, mastectomy, or just breast implants.

Well, there you have it–part one of our interview! Check back in a few days for part two!