Yesterday I had my first tissue expander fill at Dr. Festekjian’s office.

For those of you who still aren’t sure of how the breast reconstruction process following a mastectomy works, here’s a rundown: after Dr. Karam performed the mastectomy (removing all breast tissue) portion of my surgery on March 13th, Dr. Festekjian came in to insert saline tissue expanders underneath a layer of my pectoral muscles. These tissue expanders are essentially little baggies that create a pocket in the muscle. They have a needle port on top, and over time, additional saline is inserted so that the baggie and the pocket can grow. Once the tissue expander has been filled enough and the muscle pocket is large enough, the tissue expander is removed and a permanent silicone implant is inserted into the pocket.

During my initial surgery, Dr. Festekjian put about 300 ccs of saline into each tissue expander. This is a pretty decent amount of saline, so when I woke up from my surgery, I actually had breasts–yes, they were small, an A cup, but there was still something there on my chest.

Yesterday Dr. Festekjian took a look at both sides. I was concerned because my left breast seems to be bigger than the right. It had only started to look like that a few days after my drains were removed, so I was worried that I had a fluid buildup. Dr. Festekjian said that there was no fluid (yes! The evil fluid, defeated!) but that the tissue on the left was “still a little pissed off” (wise words) and that it was swelling. He decided to expand only the right side, in order to make them match a bit more appearance-wise but also to let the left side heal more.

Maria, one of the RN’s in Dr. Festekjian’s office who is pretty much awesome (she removed my drains last Monday), did the fill. Sidenote: I really like Maria. She is very understanding and has a lot of patience. I took some before and after pictures, a picture of the tools, and also a video of the fill happening. Since I have to run to work right now, I’m only going to post the pictures. 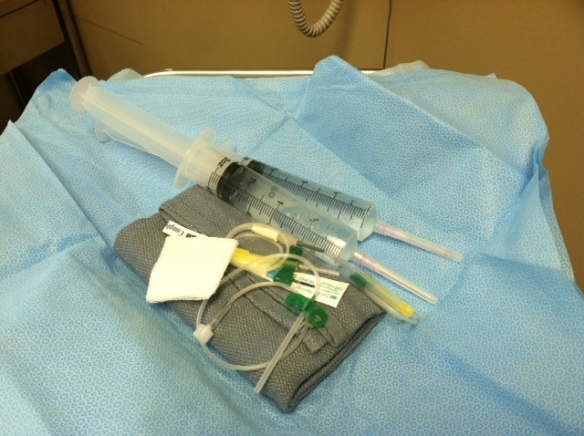 Before going to talk to another patient, Dr. Festekjian used a magnetic device to “locate” the tissue expander port through my skin. He then marked it with blue ink–“X marks the spot”, redefined! He disinfected my skin with some sort of brown substance, I think it was iodine. He then made sure I was OK with Maria performing the fill. He said he could do it himself, but I was already scheduled to see Maria the following Thursday for my second fill and I totally trust her, so I was fine with it.

The fill itself did not hurt, but I felt the needle prick for sure. That was the worst part (as it always is). I thought I would be able to feel the saline going into my tissue expander and making my muscle tighten, but I didn’t feel it at all. Maria was very slow and steady with the saline syringe.

She inserted 75 ccs of saline, removed the needle and then put a bandage over my skin where the needle had been. I could see a difference in that my breast didn’t look as droopy. I took a before and after picture, but since I have my bra on for both it’s kind of hard to tell. The biggest difference you can see is the fact that my bra doesn’t look as saggy.

I thought I would be in pain after the fill. A lot of women experience tightness (from the muscle stretching) and have to take pain meds. It’s been almost 24 hours and I haven’t felt any pain at all.

My next fill is going to be next Thursday. Fingers crossed that I get both sides expanded! Jeani, Dr. Festekjian’s wonderful assistant, booked me for my next five fill appointments, every Thursday starting yesterday. We’re not sure I’ll need that many, but it’s nice to have them planned out.

I’m happy now. This process is really happening! My reconstruction is starting!