I was really, really hoping I would get my drains out by Friday, since I had plans to see a lot of people on Saturday. Well, no such luck for me: they were still producing about 50 ccs of fluid each on Friday. The assistant at my Dr. Festekjian’s office, Jeani, did tell me to keep in contact with her via email over the weekend to see if they would be ready to pull on Monday.

Well I walked in the door at my parents’ house today around 5 pm, took my shoes off, dropped my bag, and looked down to see that my drain tube was dangling by my side. I’ve gotten relatively used to this unpleasant site; my drain tubes have come detached at a few random times. Only this was different: the drain bulb broke! The area where the bulb attaches to the tube just broke off completely. So basically…the drain won’t work.

I got in contact with the plastic surgery resident on-call at UCLA Medical Center. I explained to him what happened, but also made sure to note that my drains were very low (30-35 ccs, yay!) and that I had already planned on going to see Dr. Festekjian on Monday morning to get the drains removed. He told me to wrap the drain tube in a zip lock bag and to tape the bag and tube together. 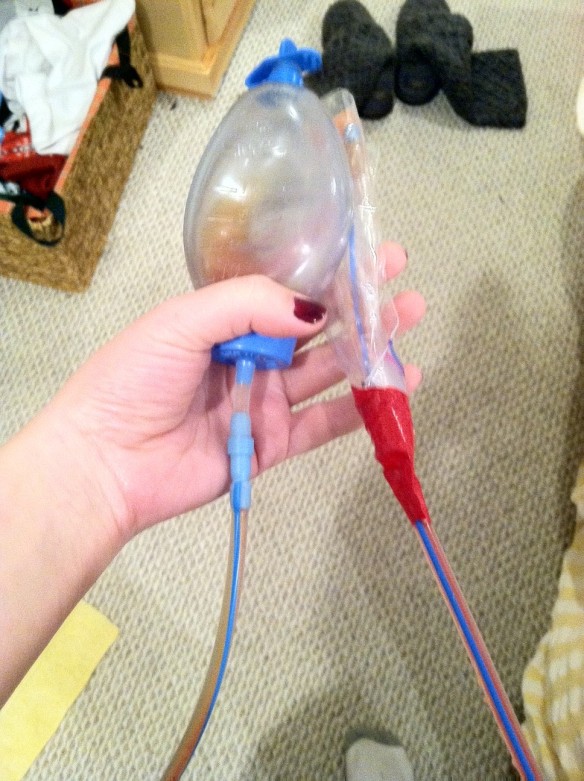 Pop quiz: which drain is messed up?! It's really hard to tell, I know.

Once I taped everything together, I emailed Jeani at Dr. Festekjian’s office. Fingers crossed I get the drains pulled tomorrow!!!!

In other news, I still feel great! I’ve stopped taking pain meds completely; the only time I feel any kind of pain is when I twist in an awkward way or bend down really far. I’ve been going on long walks (2-3 miles) every day, which is great–I love getting out of the house. I’ve also been driving for the past couple of days–I started on Thursday the 22nd.

On Saturday my roommate Danielle and I had a dinner party at our house near USC. I have been so bored and lonely at home (no offense, Mom and Dad) so I was really looking forward to the dinner. We decided to do Mexican food. Bryce (my boyfriend) made enchiladas, and Danielle bought taco meat, tortillas and a bunch of the necessary sides (sour cream, salsa, etc). We set up stations and made margaritas (yes, I’m off of my antibiotics!)

This dress, from H&M, is very similar to the one I wore last night--you couldn't even see my drains!

It was sooooo delicious and so much fun to see my friends. We had about 12 guests over. Danielle let me borrow a simple black dress with a drop waist. I attached my drains to a belt, and you couldn’t even notice them underneath. A few of my friends said that they actually forgot I had had any surgery because I looked so good! That definitely was nice to hear.

The only thing I missed out on last night was the pinata. In honor of Danielle’s 22nd birthday, I bought a Justin Bieber pinata and stuffed it with candy and random goodies (temporary tattoos, cheap sunglasses, Mardi Gras beads). I wasn’t going to attempt to whack that thing. I dislike Justin Bieber, but I don’t hate him enough to screw up my upper body after my mastectomy!!! 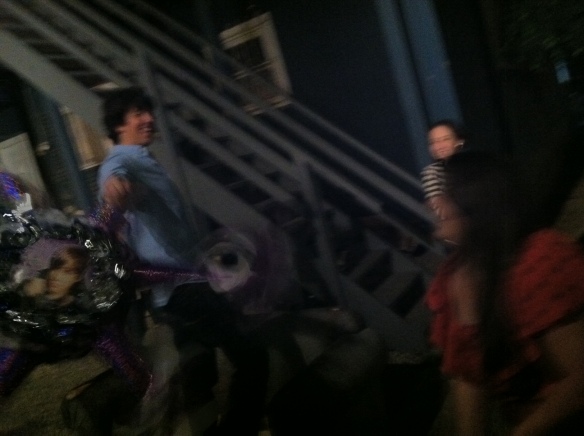 Molly takes a swing at the Justin Bieber pinata as Bryce holds it. Yes, Bryce held the pinata. He is a trooper.

Around 10 pm, after most of our guests had gone home, Bryce and a few other friends and I went to another friend’s St. Patrick’s Day party (yes, one week after the fact.) We were so cultured last night: Mexican food and Irish drinks (though I don’t particularly like Guiness.) Again, it was really nice hanging out with people, and no one could even tell I was recovering from surgery. We stayed until about 1 am and then headed home for the night.

Danielle poses with the Justin Bieber pinata after its defeat. Happy birthday, D!

Honestly, if you had told me before my mastectomy that I would be hosting dinners and going out to parties less than two weeks after the surgery, I would NOT have believed you. I’m just so amazed by how great I feel. I’m going to go back to work tomorrow, too.

If any young women are reading this who are considering doing a preventative surgery, I think it’s important to remember that younger bodies heal faster. I watched my mom recover from her mastectomy in November, and I talked to and read responses from other women who had gone through a mastectomy. In all of their cases, it was a long recovery. They weren’t up and moving a lot for at least two weeks; they weren’t going back to work for at least a month.

I really did prepare myself to be out of commission (in bed, sleeping, not driving, not working even from home) for at least two weeks, with the possibility of a third. Totally NOT the case for me. Yes, everyone is different, and everyone going through a mastectomy needs to take the proper measures to allow their body to recover. You do need to take work off. You do need to stay with someone who can take care of you. You do need to lay low for a while. But if you’re young, you probably won’t need to do that for too long. Take everything you read about mastectomies with a grain of salt, because most accounts are not coming from woman in their 20s. Consider how your experience as a young, healthy woman will be a bit different.

Well that’s all for now, folks. Fingers crossed the drains are pulled tomorrow!